5 New Johns Creek Parks: Where are they? 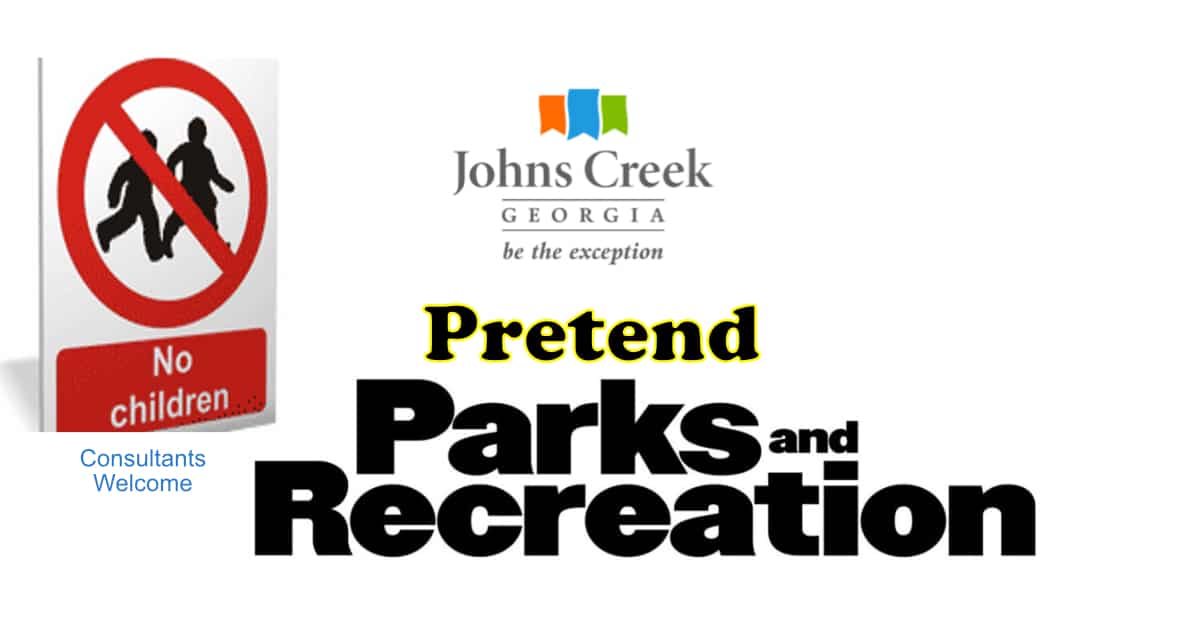 According to the City of Johns Creek Communication Department, 2016 Park Bond info webpage. "Construction could begin on selected projects as early as mid-2017 with completion of all the identified projects expected within five years."

Nearly 2 years ago, Mayor Bodker proclaimed 2017 to be a "transformational year" for approving 4 of the 5 park concepts and moving forward with construction documents.

The only documents residents have seen from the Government? The additional tax line items homeowners had to pay every year since 2016.

Where are these 5 New Johns Creek Parks, residents have been promised?

Below is the marketing documents from the City's Communication Department, of the proposed parks, pitched for the tax increase. 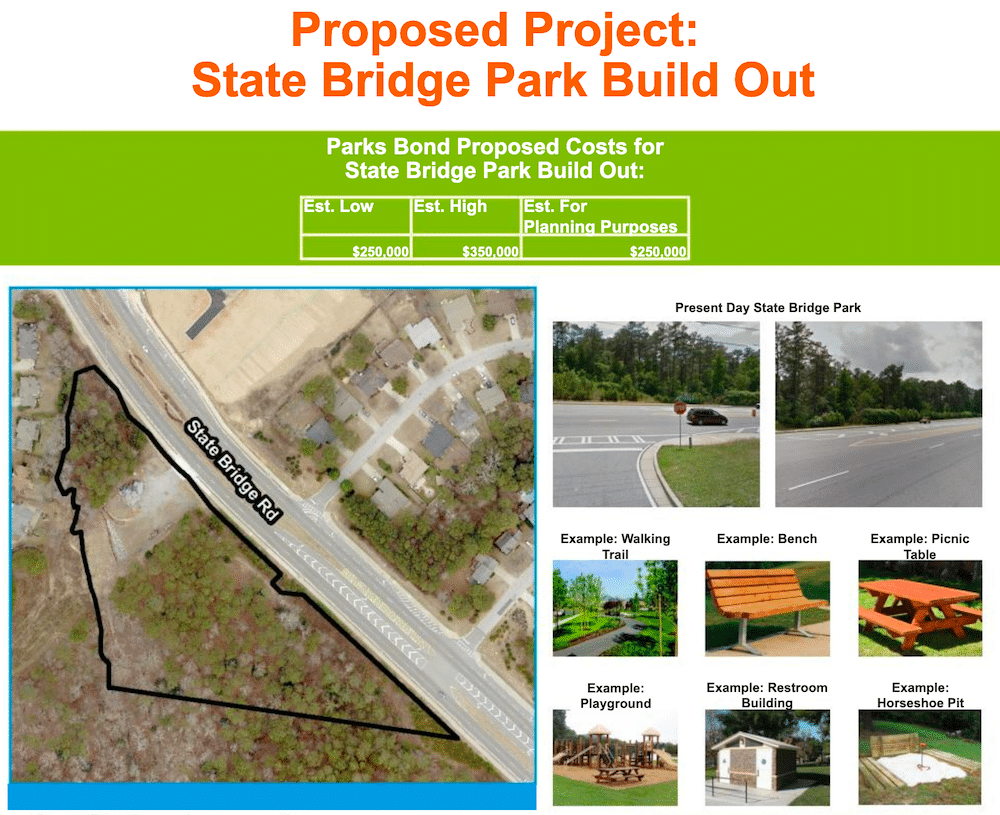 We reported about State Bridge Rd Pocket Park, back in September 2014.

Nothing has been done with the 4-acre land in 5 years. It's baffling why it is such a struggle to build out a small pocket park for City Staff.

The consultants drew exciting plans with Forest canopy walk and nature playground. The park can only accommodate 17 parking spots.

It hasn't been discussed recently or is a priority for Mayor Bodker to have on the agenda. 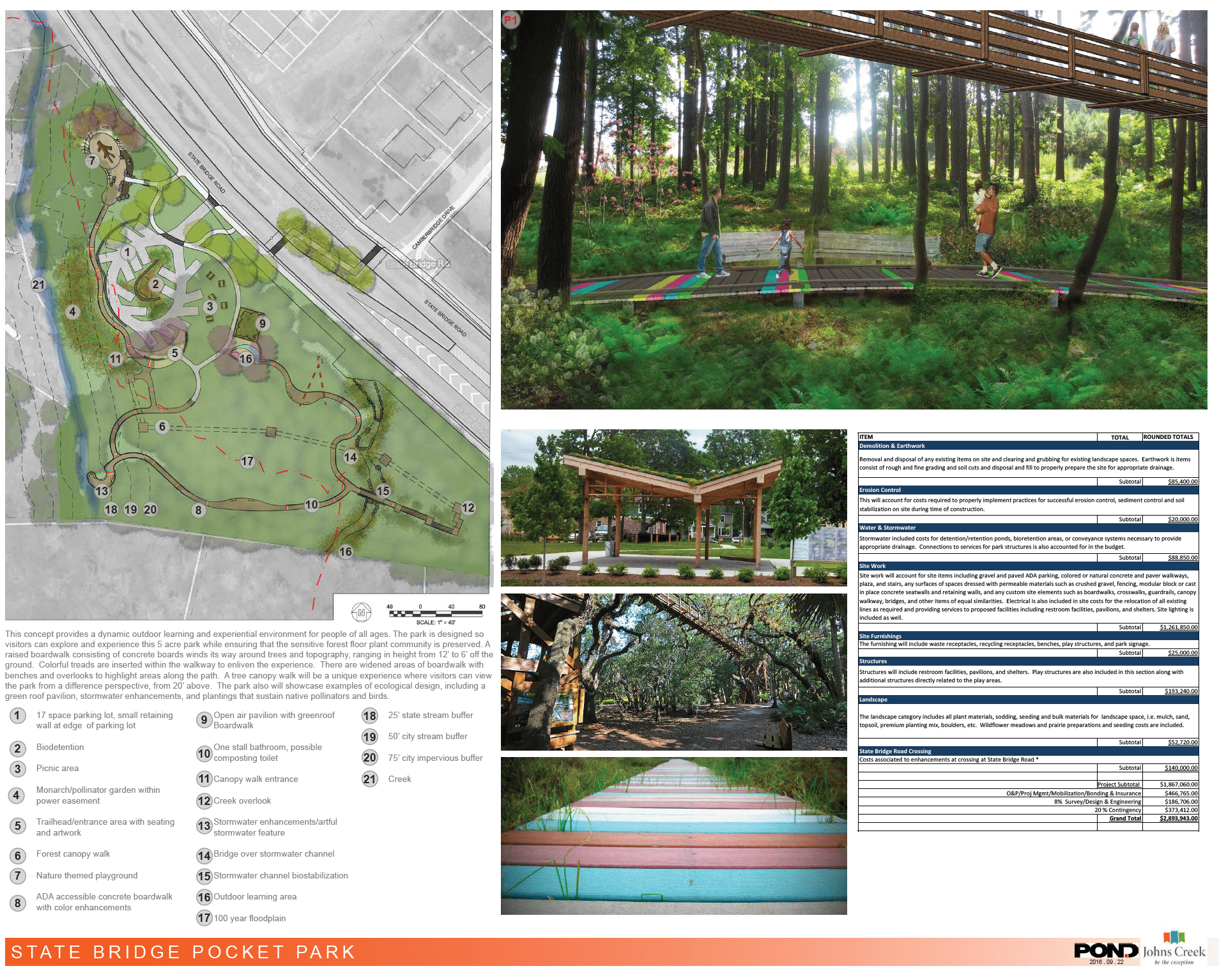 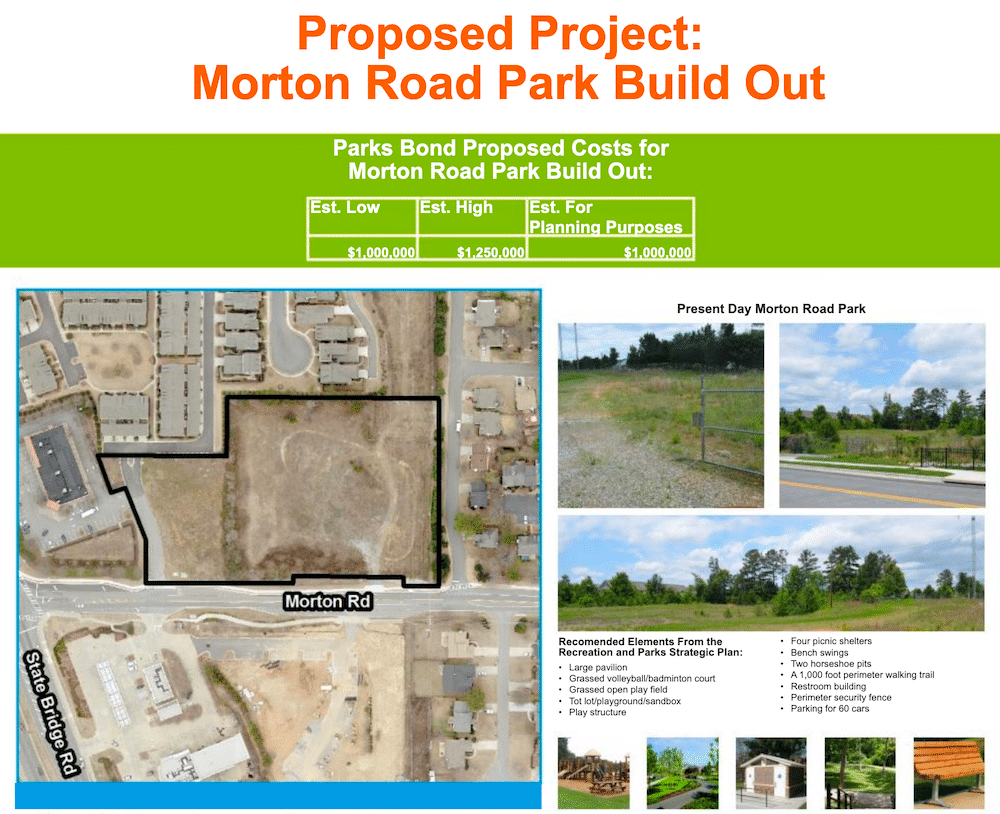 They had the option of leasing it for $1, for 50 years. The land is under high powered transmission lines, making it nearly unfeasible for development, hence the $1 lease.

Mayor Bodker wanted to "own" the land since the City would be turning it into a park. If that does happen, do you think the playground equipment will outlast 50 years?

Originally estimated for $1 million in 2015, the price tag has gone up to $2.5 million once consultants got involved. Splash pad, playground, half basketball court, bathrooms, and pavilion fill the 4 acres. All with a road paved through it, so cars can drive around the small park while kids are playing. Hmm... Are kids really welcome here? 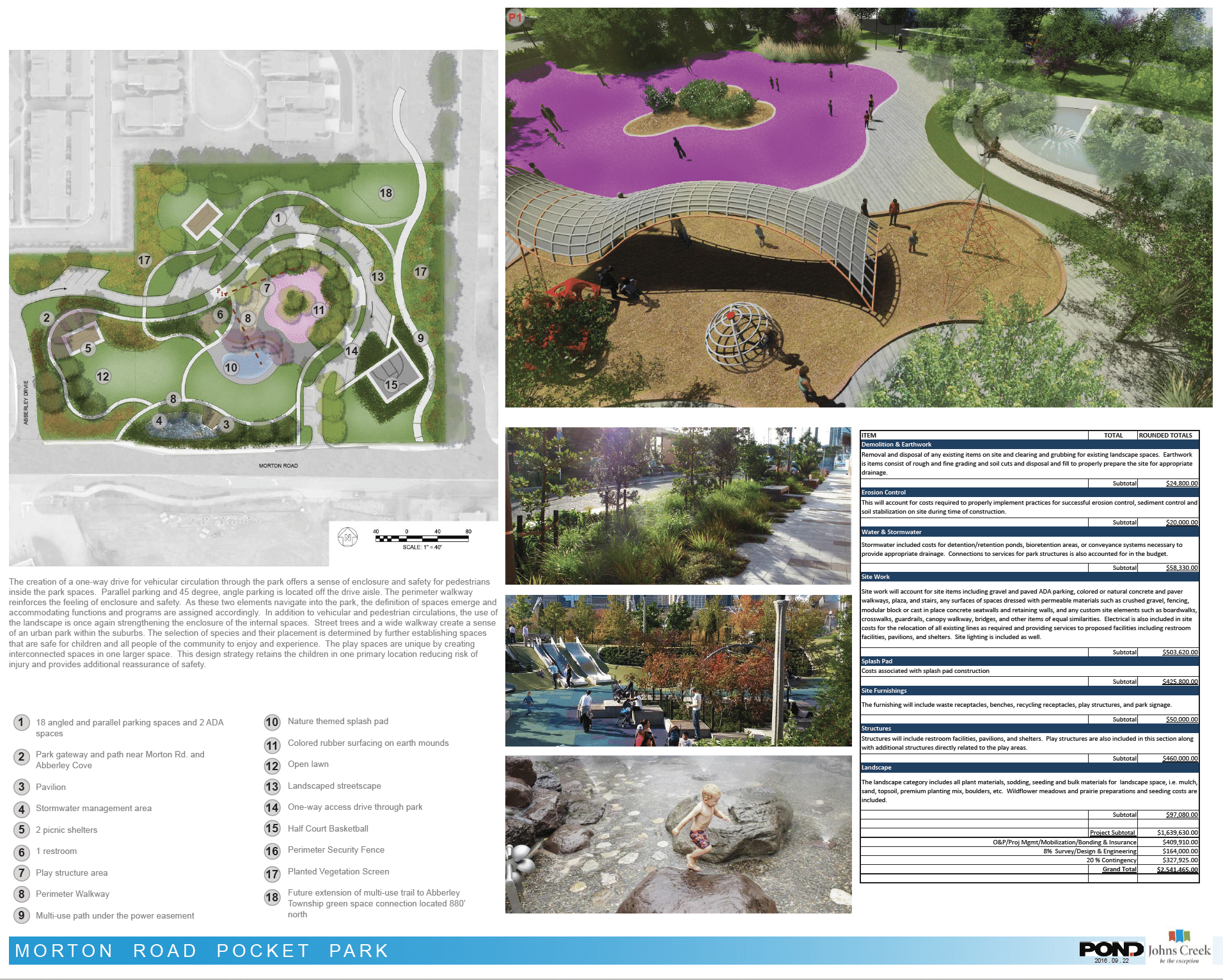 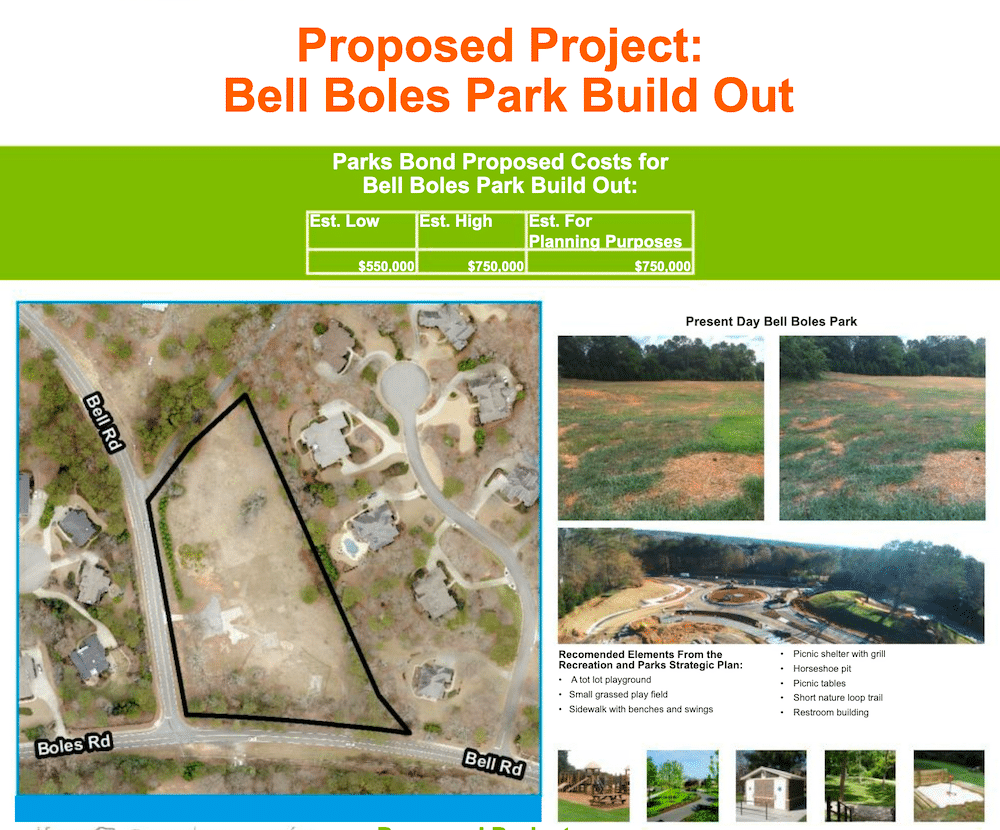 This pocket park had plans for a community garden and bathrooms, which escalated the costs. It was put on the back burner, with Cauley Creek Park nearby. 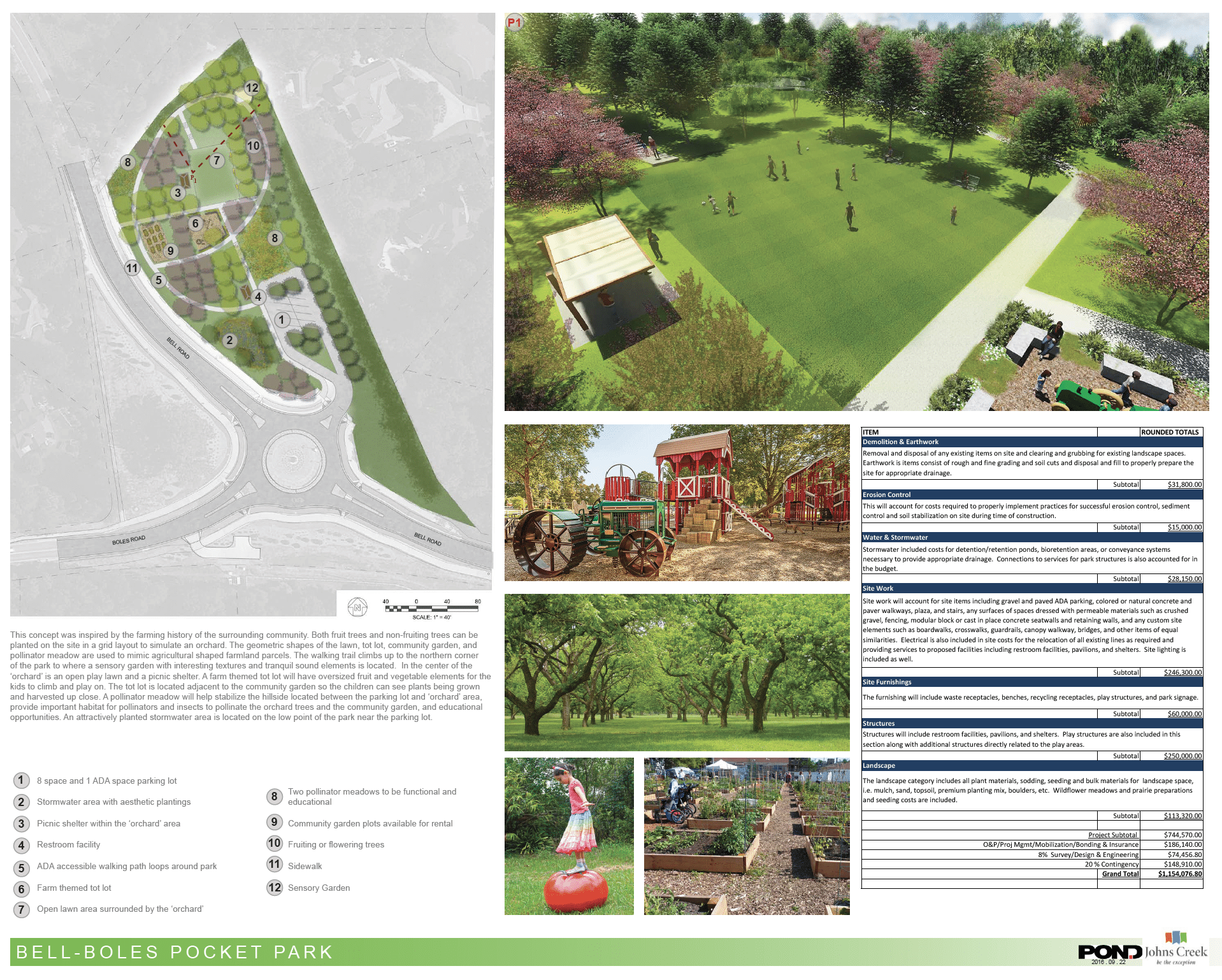 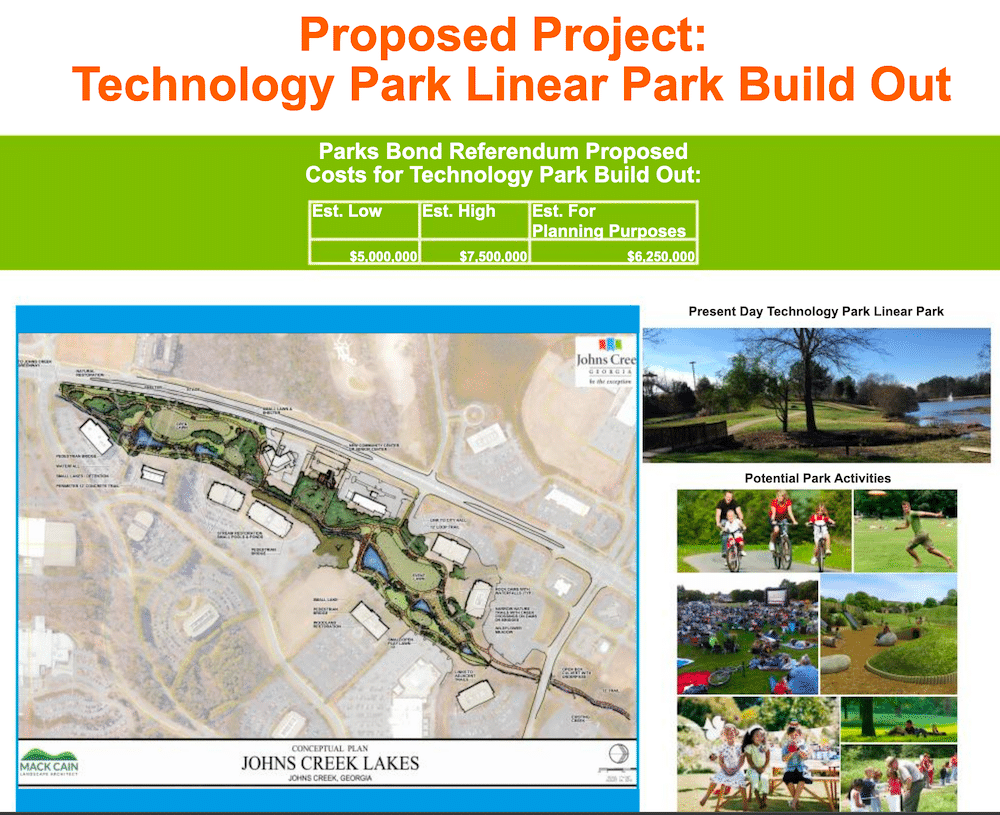 The City paid $ 2.85million for the TPA Lakes / 2 retention ponds in Tech Park. City Hall is now located in front of it. Although there is no official park yet, Staff had exterior accessed restrooms built at City Hall with the Park Bond money. This was not on the original proposal.

The City Staff has ambitious plans of backfilling the ponds and creating festival fields. Consultants included a Wedding Chapel, waterfalls & community center. A high-density city center is desired by some on Council for the area.  The indoor recreation center was only mentioned during the referendum. 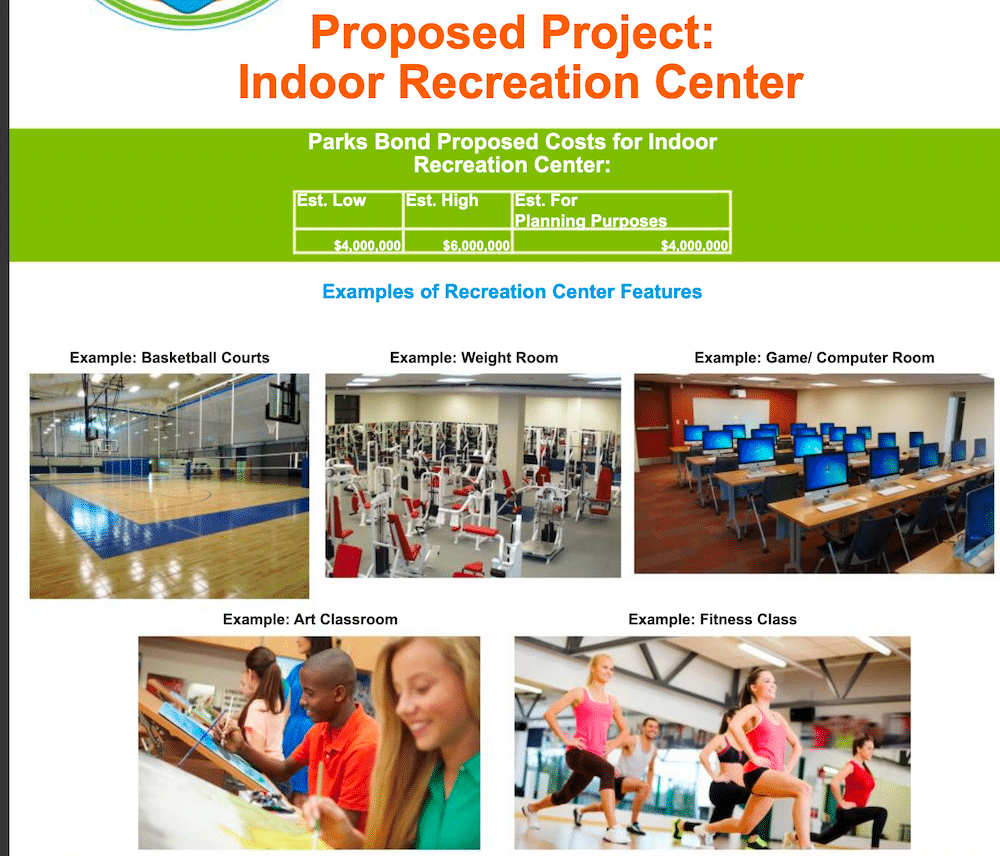 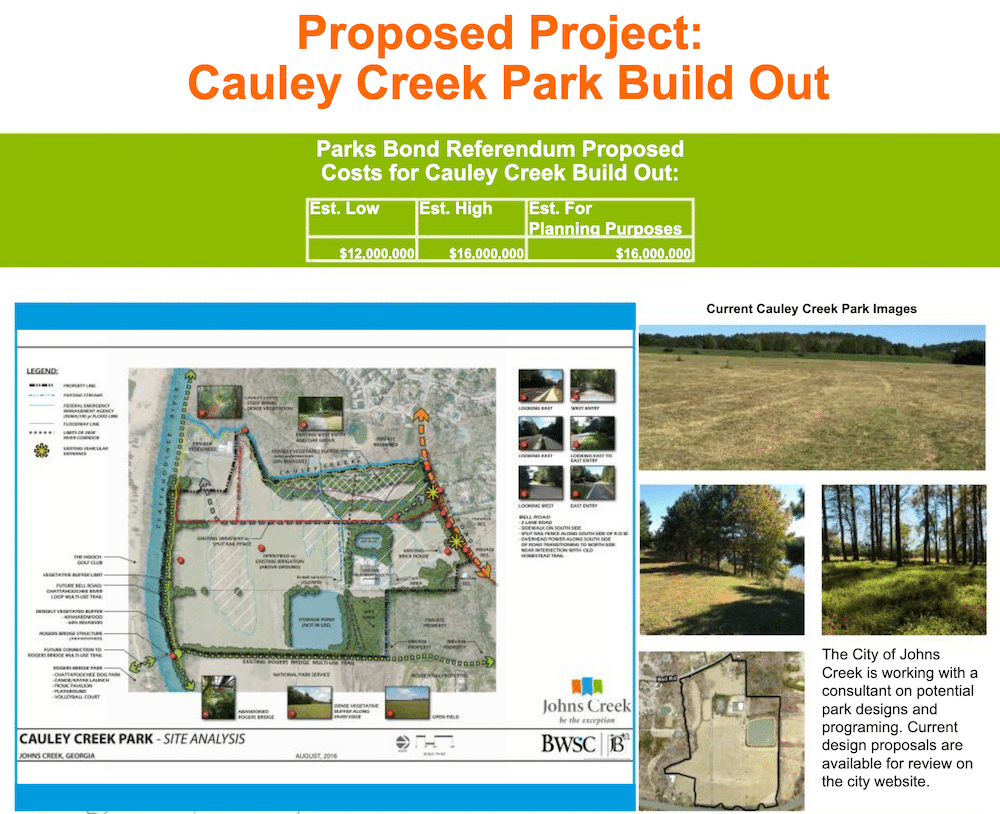 The City has owned Cauley Creek for nearly 4 years and nothing has been done with the land other than relocating the roadkill dumpster that was poorly placed by City Staff Public Works, near Johns Creek High School.

The park will be nearly 195 acres. City Council paid approximately $8 million for the additional land next to Cauley Creek Park. The former sewage processing plant & 133 acres of land was purchased in November 2015 for $20.5 Million. Those funds were saved from the prior council.

In October 2018, City Council approved a Master Plan for Cauley Creek. It is estimated to cost $27 million to build out the entire park, which will take several years. The City Council agreed to build out in phases with $10 million allocated from the park bond.

Where has the Money gone?

$1.67 million has been spent on FieldTurf for Newtown & Shakerag Park fields. This has been the most tangible and widely used items spent with Park Bond monies. It could have come general fund.

Enhancements to existing parks were also done. Such as a gravel parking lot and smokehouse at Autrey Mill. Those were fairly minor costs.

The remainder of the costs have gone to consultants, fees and issuance costs. Significant interest is being paid each year on the loan.

This really begs the question: why borrow all that money, if they weren't ready to spend it?

Other proposed features for Autrey Mill seem highly unlikely to be implemented according to the City Manager. Even though consultants and surveys recommended them. Such as archery range. A rope course, and a special needs adventure playground for kids and adults were also in the promoted renderings. Nothing has been mentioned about it.

Finally, to date (5/1/19), of the $40 million borrowed, ~$13 million has been spent, and $10 million allocated for Cauley Creek Park. This leaves approximately $17 million for 3 pocket parks and Linear Park.

In conclusion, not a single construction document for a park has been executed since the Park Bond was approved. Mainly because the costs were grossly underestimated for the referendum.

10 comments on “5 New Johns Creek Parks: Where are they?”