Jay Lin's formal name is Yi-Jeng Lin.  Like his City Council campaign, he has received many questionable donations.

The Bell Road apartment complex was a contentious and controversial zoning development, that Jay Lin voted to approve.

He received $1000 from Bell Rd apartment Developer - Dave Dixon, and another $1000 from the Contractor, Doug Davidson.

Jay Lin also got 2 donations from incompetent Tom Black. The former Johns Creek Public Works Director, was riddled with conflicts of interest and is now currently with the Providence Group. This is the developer of the State Bridge Rd 'Megaplex' who is suing the City of Johns Creek.

GA SOS Election Manager, Gabriel Sterling donated $100. He doesn't list his Gov job. Why is that?

Jay Lin replaced Brad Raffensperger, in 2015 when Brad resigned from the city council to run for State Rep. Brad heavily promoted Jay Lin to fill the seat. Although Jay Lin marketed himself as a fiscal conservative, he was far from it.

He voted for every tax increase that came his way.  Jay Lin had a less than stellar attendance record and often missed important City Meetings.

Taxes went up while he was Johns Creek City Councilman. This is despite him taking a "Taxpayer Pledge", not to raise taxes. 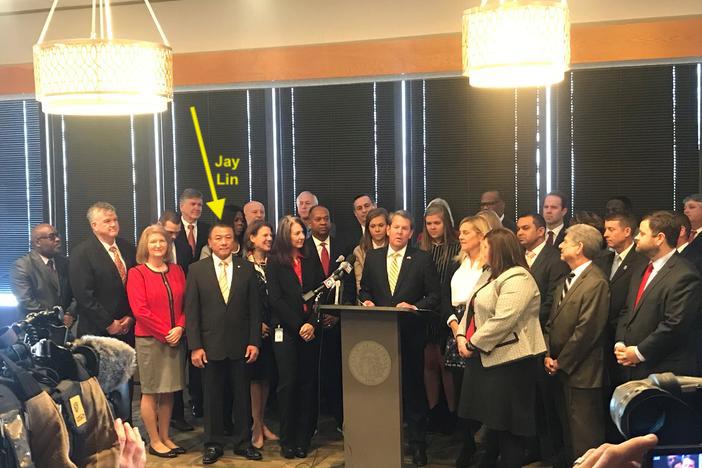 Jay Lin appears to be close to Governor Brian Kemp. In Jan 2019, Jay Lin was on Gov Kemp's "Transition team". He currently serves on a number of task forces including the Minority-Owned Business Taskforce under Georgians First Commission.

With Jay Lin's business as a developer, and hobnobbing with developers, it comes as no surprise he was recently appointed by Governor Brian Kemp to the Georgia State Properties Commission.  According to its website:

Below are screenshots from the donations noted above.