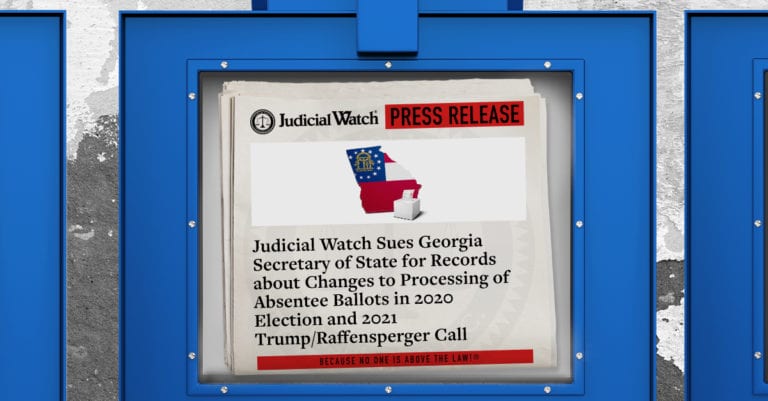 The first lawsuit was filed after Secretary of State Raffensperger failed to respond to a November 17, 2020 request for:

Judicial Watch second lawsuit is for:

In an hour-long telephone call on January 2, 2021, President Trump and Raffensperger discussed Trump’s concerns about voter fraud in Georgia. The conversation became controversial after Raffensperger’s office allegedly leaked a recording of the call to the Washington Post.

“We want to know more about what happened behind the scenes in Georgia during the 2020 election,”  “Hiding key records about the controversial settlement agreement and the President’s leaked phone call with Raffensperger prevents Americans from knowing the full story and deciding for themselves whether the outcome in Georgia was fair.”  - Judicial Watch President Tom Fitton

Relatedly, in April 2020, Judicial Watch identified thousands of persons who may have registered to vote in Georgia at non-residential addresses. Judicial Watch shared its data with Raffensperger’s office at the time and requested an investigation. On January 5 of this year, Judicial Watch announced that, of this list of voters who may have registered using non-residential addresses, 4,700 voted absentee in the 2020 presidential election. Georgia law requires that citizens registering to vote must reside “in that place in which such person’s habitation is fixed….”

Because No One is Above the Law

In 2020, Judicial Watch sued North Carolina, Pennsylvania, and Colorado for failing to clean up their voter rolls and also sued Illinois for refusing to disclose voter roll data in violation of federal law. These lawsuits are ongoing. Judicial Watch also has filed dozens of public records requests in multiple States about the 2020 election.