Land Use Comp Plan being PUSHED Thru Despite Residents Concerns

At the July 25th, 2017 Johns Creek City Council Town Hall, multiple residents complained about the overwhelming material in the Comp Plan, stating that it is very hard to review. The 244-page report is heavy on images and non-essential details and is a monumental task just to review - even at a high level. Many of the before-and-after maps contain the same colors but represent different uses, creating confusion.*

Multiple suggestions were given to the Council and City Manager, both of whom agreed were reasonable and doable.

It has been 45 days since the City Manager & City Council agreed to the suggestions, and NONE of have taken place.

Though the City did not make it easier for you to understand, the JCP will!!

So what are the BIG Changes in the Draft?

1) A significant increase in Mixed Use Developments

Some of the biggest changes in the Comp Plan are the conversion of commercial parcels into Mixed Use Developments, at 3 levels of intensity.

Low-Intensity 3 stories in Height & 8 units per acre 2, the proposed locations:

Medium-Intensity Mixed Use Developments is described as 4 stories & 12 units per acre and is proposed on State Bridge Rd & Kimball Bridge Rd.

High-Intensity Mixed Use Developments is described as 5 stories & 16 units per acre. It is proposed on Barnwell Rd & Holcomb Bridge Rd and in Tech Park.

This Urbanism concept should come as no surprise to longtime JCP readers who can recall our post ‘Apartments Galore in the ‘District’. As a refresher, the City paid $250k to Urban Design Associates to devise plans to redevelop a large amount of private property into a mini-Buckhead. Residents' outrage thwarted the plans. It has now reappeared in the Comp Plan Draft.

It is absolutely stunning that with all the traffic & congestion, anyone in City Hall would consider increasing the density here.

So what is a driving force that seeks to allow Mixed Use near residential in Johns Creek? Developers and commercial property owners may desire higher density, mixed-use in order to maximize the value they can realize. The denser the parcel, the more monetary yield it can produce.  Quite often during zoning hearings, developers request variances to make the development more financially viable. With Mixed Use allowed, developers can request to add-on another floor or two, to make the project even more lucrative.

Another concerning proposed change is dividing the Shakerag area and moving a large part of it into the McGinnis Ferry Area.*** Doing so would increase the allowable density. Residents in that area prefer to remain in Shakerag with its current low density.

Within the Land Use Projects section, Historical Preservation was deemed NOT WARRANTED. This would have included incorporating preservation requirements into the Zoning Ordinance for identified historical/archeological resources and cemeteries and develop a historic preservation program.

The reason described for “DROPPING” is “due to the results of the Historic Resources Survey”.**^

Unfortunately, it appears the City and Consultants did not read the Historic Resources Survey Report that Johns Creek had conducted by UGA in 2012.  On page 5, it states the following: “This basic, standard survey does not gather all the kinds of information needed in local preservation planning”.^ The report’s purpose was to identify buildings, sites, structures, and objects of historical, architectural, and cultural significance. ^

It is up to the municipality to formulate preservation of identified sites. Will they? Now is a good time. 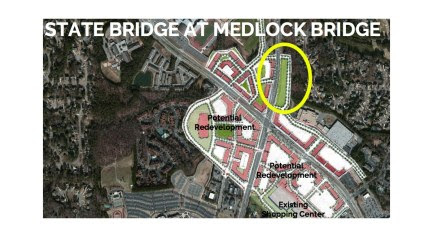 The most offensive new road proposed, abuts the Macedonia Freed Slave Cemetery. As if it wasn’t desecrated enough, the Consultants and City Staff included the road in the draft plan.^* It is envisioned with potential redevelopment of 3 stories of mixed use.

Several Roads are indicated in the plan for widening^^*. Some of these projects will take away the residential feel.

Millions have been spent on the sidewalks and median beautification on State Bridge Rd. Now it is slated for 6 Lanes as a TSPLOST project, and on the land use draft. Where will these lanes go? Will the beautiful medians be removed for more pavement or the sidewalks? 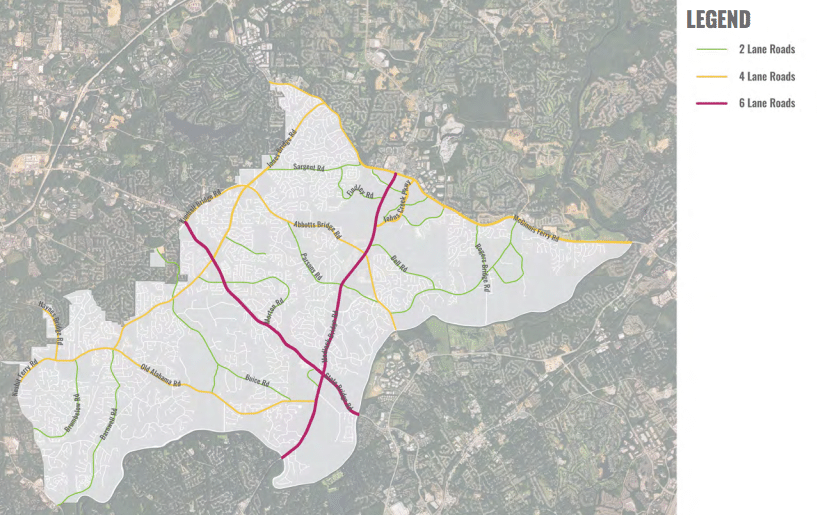 The following were indicated as potential roundabouts.^**

September 15th is when Public Feedback ends, and the Comp Plan moves forth to Atlanta Regional Commission (ARC) unless City Council extends it.