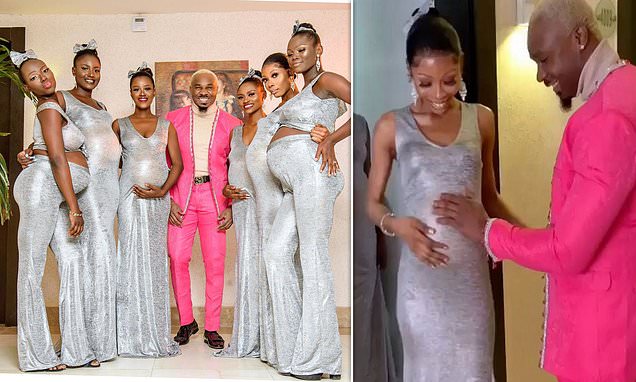 Controversial socialite attended a Nigerian wedding in the company of six pregnant women, ‘who are all carrying his children’.

Red carpet events, movie premieres, fashion weeks, and weddings are very important for celebs. Attending a celebrity wedding imposes pressure for guests to look better than usual, and even show off.

Yet, if you think that the biggest problem of all A-listers is to find something nice to wear, you are wrong! It turns out that some people believe they need much more to look fabulous enough!

One socialite drew attention on social media after showing up with six pregnant women, who he claimed were all carrying his children! This is not the first time Pretty Mike’ shows his “playboy” lifestyle to the public.

This time, the controversial man told his Instagram followers that he went to a Nigerian wedding, and the photo was ‘no film trick… we are just living our best life’. He then finished his post by adding a string of hashtags that read “#HappyHome”, “#Familyiseverything” and “#babybum”.

Pretty Mike was even filmed feeling each of the baby bumps of his ‘six baby mothers to be’, as they waited in line at the wedding!

Pretty Mike, whose real name is Mike Eze-Nwalie Nwogu, is a nightclub owner in Lagos, Nigeria’s largest city. He has always been open about having many girlfriends.

Back in 2017, Pretty Mike caused outrage ad was reportedly arrested for putting female guests in chains and walking them on leashes to a wedding.

Afterward, he reportedly signed an undertaking to ‘stop whatever act of putting girls on a leash or any other degrading treatment to ladies and guys’.

In September last year, he posed with five women in wedding dresses, explaining that it was his ‘dream’ to marry ‘two of my exes and three of my current girlfriends’, adding:

Yet, his behavior faces harsh criticism, and critics believe the latest stunt is the ‘same madness’ they witnessed times before.

One of them said:

‘This is one reason I must have a heavy military presence at my wedding venue. You’ll not come and chase clout on my special day.’

He was attending the celebrity wedding of Nollywood actor and comedian Williams Uchemba and his girlfriend Brunella Oscar, which was attended by numerous other celebrities as well.

In a follow-up video he posted, he is smiling in bed with four women, and gets a rub down in the shower from at least two. In the post, he asks his followers to think of a name that describes his “thrilling lifestyle”.