Hearing a bear’s death moan can raise the hair up on your neck.

There are plenty of strange sounds in the woods, but perhaps are eerier than a bear’s death moan. If you have never been Bear hunting before, this sound can take you by surprise. Mostly because there’s really no other sound like this in the woods.

In the video below, this bowhunter makes a perfect shot on this large black bear, which subsequently runs out of the frame.

However, listen closely. Because you’ll get to hear this strange and downright creepy sound as it echoes through the pines.

The big black bear was all claws, teeth, and snarling as it tried to make its escape from an unseen enemy. Off in the distance, an eerie sound of the big bear’s death moan fills the air. 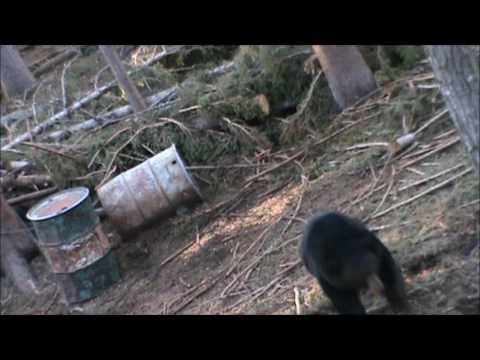 Animals SHOULD BE LEFT ALONE to live and thrive in their habitat! Karma will come when you least expect it. One less threat for the endangered species!

How stupid do you have to be to murder an animal like that and be proud of your premeditated torture?
What if you were in the park with your family and a sociopath shot you, using silent and painfully slow technical ways unknown to you?
Very stupid, mean, and unworthy to be in possession of human methods of survival.

Hope this hunter falls off the tree and breaks both legs, Hunting for sport is mean and cruel. That bear and it’s family was not hurting anyone. You baited them there to get that cheap shot. Shame on you.