Could Ranked-Choice Voting be coming to Johns Creek? 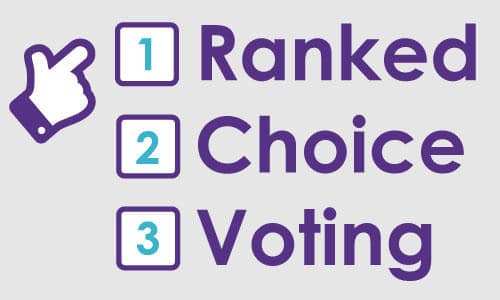 Councilmember Chris Coughlin intends to introduce a resolution to do just that at the January 13th work session.  If passed by the City Council and the State Legislature, the resolution to introduce Ranked-Choice Voting (RCV) in Johns Creek, would take effect no earlier than 2021 and will apply only to municipal elections. Ranked-Choice Voting commonly referred to as “Instant Run-off Voting”, would eliminate the need for run-off elections saving the City an estimated $140,000 per election.

Ranked-Choice Voting does not currently conform to Georgia voting law, so, if the City Council votes to adopt the RCV Resolution it would not take effect until enabling legislation is passed by the Georgia General Assembly allowing municipalities the option to vote using Ranked-Choice Voting.  Currently, state law requires run-off elections between the top two candidates when no candidate receives more than 50% of the votes.

How does RCV work?

Ranked-Choice Voting is a voting system in which voters rank each candidate in order of preference instead of choosing only one candidate for each position. Then the computer is able to tabulate the results and instantly declare a winner by simulating a series of run-off elections based on voter rankings.

On election day, voters rank all candidates. A voter would select “1” for their favorite candidate, “2” for their second choice, “3” for their third choice, continuing until all candidates have been ranked or until they no longer have a preference between candidates. Below is an example of a Ranked-Choice Voting ballot. 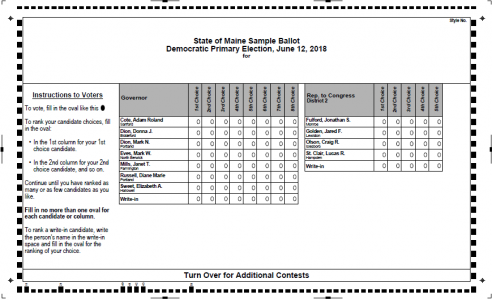 Example of an RCV ballot

RCV would eliminate the need for run-off elections saving the City of Johns Creek an estimated $140,000 per election. Voters would only need to go to the polls once. And would not be subjected to an additional four weeks of campaigning, yard signs, and heated debate. There is also less uncertainty because winners would be known and announced quickly allowing the city to move on and enjoy the holiday season.

With RCV,  there is no voter’s remorse or concern about a wasted vote. Leaving voters free to vote for the candidate they really want rather than having to try to predict which candidate has the best chance of making it to a run-off. One only has to look to Johns Creek’s recent elections to see how this might have made a difference. For City Council Post 4, there were four candidates. The two candidates who received the fewest votes and did not make it to the run-off collectively received 33% of the vote, whereas the candidate who received only 19% of the vote was in the run-off.

Using a Ranked-Choice Voting system consistently results in more voter satisfaction. Voters tend to be happier with the election results even if their first choice doesn’t win because they often get their second choice. This is particularly true in highly divisive elections. Where voters may be strongly opposed to candidates on either end of the spectrum. The RCV results in the fewest number of voters being stuck with a candidate that they despise.

To be most effective, voters must do more research upfront to rank all of the candidates on election day. They won’t have additional time to decide who is their second choice. This requires more critical analysis, rather than just selecting one winner and waiting to see who makes it to the run-off.

Some say that the change would be too confusing for voters and would encourage more candidates to run. Resulting in a crowded ballot that could further confuse voters.

Where is Ranked-Choice Voting in the USA?

RCV is also preferred in many countries and by private entities such as the Oscars. In the United States, the State of Maine has recently adopted RCV statewide. Eleven cities outside of Maine use RCV including San Franciso, Santa Fe, and Minneapolis. Ten other cities have recently adopted RCV but not yet implemented it.  Several states currently use RCV for military voters. The run-off schedule doesn’t allow enough time to send a second ballot. See the map below for all the US locations using RCV. 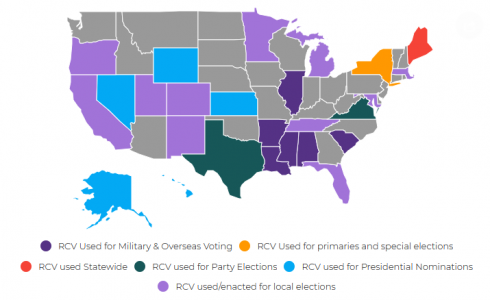 Learn more about Ranked-Choice Voting at FairVote.org or RankedChoiceVoting.org