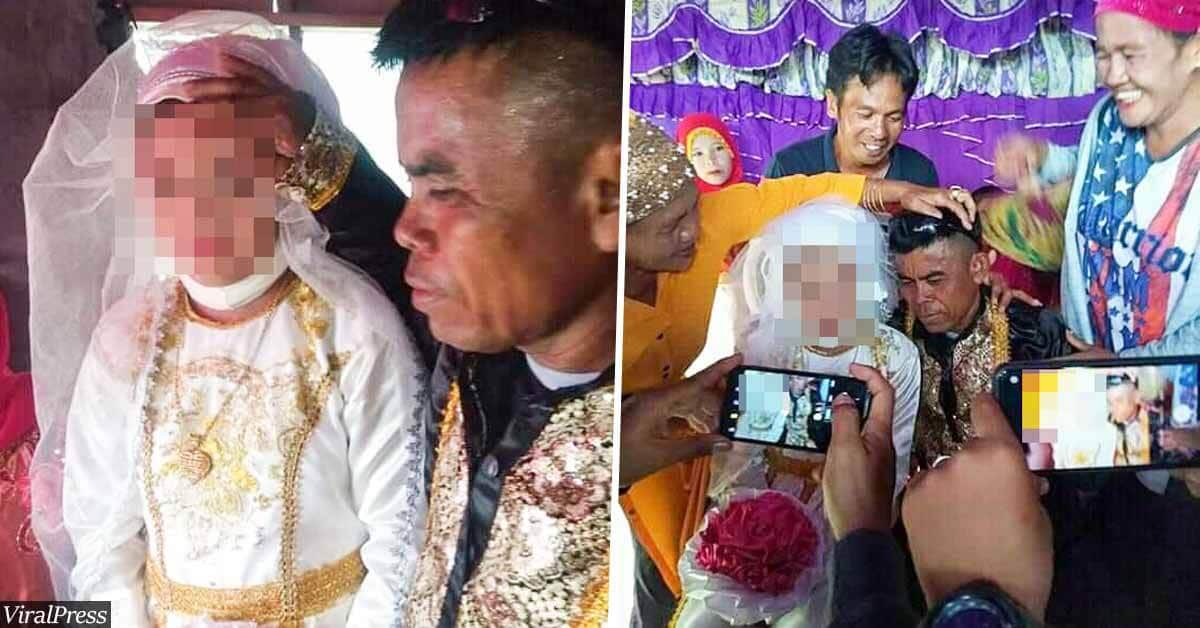 Shocking images show the wedding ceremony of a 13-year-old girl and a 48-year-old man in Maguindanao, Philippines.

Traditions and customs vary all around the world. They reinforce important values in the community and represent a powerful component of a culture. In most cases, they are beautiful and valuable, but they can also become an obstacle to progress.

Yet, their biggest flaw is that they are hard to change.  The photos of the wedding ceremony of a 13-year-old girl and a 48-year-old man in Maguindanao, Philippines, saddened the world!

The shocking images show the husband holding the child bride, and even kissing her on the chick. The wedding took place in the town of Mamasapano on October 22.

The child bride, Asnaira Pamansag Mugaling, became Abdulrzak Ampatuan’s 5th wife in an Islamic wedding that lasted for one whole day. During the ceremony, the child wore a white traditional gown as she sat beside the groom.

She later stated that she is not afraid of Abdulrzak because he is “nice to her”.

“I am learning how to cook because I’m not good at it now. I want to make my husband happy.”

Three weeks after the wedding, the groom built a small house for the couple to live together. His child bride now carries out household chores and takes care of his children from other marriages, who are the same age as her.

The farmer showed no remorse about marrying a 13-year-old girl.

“I am happy to have found her and spend my days with her taking care of my children.”

He intends to have children with her when she turns 20 and went on to say that he will send her to school to get an education until she is prepared to have kids. In some regions of the Philippines, especially in areas where Muslims are a majority, children can marry once they start menstruating.

UNICEF statistics show that the country has the 12th highest number of child brides in the world, standing at 726,000 cases currently.

“Child marriage is a human rights violation that we must end to achieve a better future for all. Isolated and with limited freedom, married girls often feel disempowered. They are deprived of their fundamental rights to health, education, and safety.

Child brides are neither physically nor emotionally ready to become wives and mothers.”