Subway Worker Falls Asleep While Making Customer’s Sandwich: ‘I Can’t Imagine How Underslept She Is’ 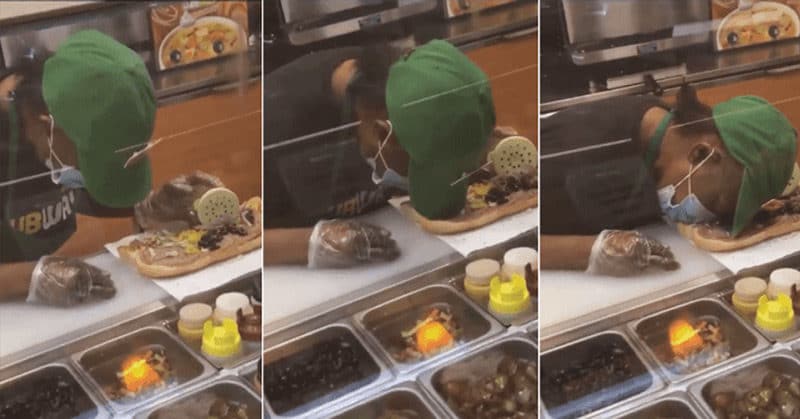 We all need rest, a day off work to relax and sleep and pull ourselves together after a week of hard work. Have you ever felt like falling asleep at work? Have you ever been so tired that you don’t even care that you are not at home?

This is why power naps are simply miraculous! Yet, the short siesta of a Subway worker was caught on camera, and it sparked debate online!

The employee too the extra zzz’s she needed face-down in a customer’s sandwich! Just in time to catch the moment, the customer pulled out his phone and captured it all.

The employee sprinkles pepper onto the sandwich, and then slowly nods off, and eventually falls asleep with the face down in the Sub!

TikTok user ss4xgoku1 shared the video on TikTok with the caption:

“Like fr [for real]… I js [just] wanted a Sandwich bro. This lady fell asleep on my sandwich”

TikTok users were divided into two groups, those who were concerned about the young woman, and those who found the clip hilarious! Those in the first group wrote about the difficulties customer service workers deal with every single day.

“This is actually really sad. I can’t imagine how underslept she is. Not to mention the wage people get paid at Subway… She deserves better.”

Another agreed, writing that “we’re too hard on service workers.”

User Cameron Davis added that the video is sad, and the “overworked” woman needs a day off. Many people discussed the very small wages, and crazy working hours of fast-food employees, all in the attempt to support their families.

“We can’t feed our families, pay our bills, or even keep a roof over our heads on minimum wage pay,” states the movement which started in 2012 when two hundred fast-food workers walked off the job to demand $15/hr and union rights in New York City.

Meanwhile, many netizens speculated that the Subway worker in the now-viral video may not have been overworked as many suggested, but rather under the influence of drugs while on the job. “That is not ‘no sleep’ or ‘underslept’… That’s nodding [sic] out… Strong drugs, unfortunately. If you know, you know… I wish her healing.”

On the other hand, many netizens found the video highly entertaining and thought of numerous jokes related to the event.

“I would have jumped over the counter and made it myself.”

In the end, the user who posted the video spoke the truth behind the video ad cleared up all speculation:

“Can y’all stop with the negative comments. The lady woke up after the video ended. She is fine. She just needs to not do drugs before work.”

Open Letter To The Long Gray...