As the legal maxim goes – Justice delayed is not justice served.

So whatever happened to Georgia House Speaker Ralston, accused of delaying more than a thousand legal cases?

Ralston, an attorney in private practice, admitted he delayed cases using the state’s “legislative leave” law, but stated he has done nothing illegal or unethical.

Rules for Thee But Not Me – Georgia Legislature EXEMPT from FOIA

This “Legislative Leave” is a privilege that no other attorney has. The Georgia Legislature has conveniently exempted itself from the Open Records Act, and the public is unable to FOIA Ralston’s calendar.

According to the AJC, in 2006, lawmakers in the House and Senate passed Senate Bill 503, which expanded the privilege to cover any time a lawmaker’s “presence elsewhere is required.”  It came before the House for approval just 90 minutes before the session’s required end at midnight, passing in the House 158-2, then in the Senate unanimously.
After a public outcry in 2019, GA legislation approved a bill addressing this “privilege”.

Ralston is considered one of Georgia’s most powerful politicians. Georgia Trends has previously named him one of their  “Most Influential Georgians.”

Ralston is well-known to campaign against incumbent conservatives that speak out against him. He pushes or halts legislation as he see’s fit, selects and removes people from committees as he deems. Nothing seems to get done in Georgia without Ralston’s blessing.

Ballotpedia compiled Ralston’s entire campaign contribution history to the tune of $4,767,357. That is an astounding amount of money considering his rural district cast a total of 32,329 votes in the last election. He won in Nov 2020 with 83% of the vote. 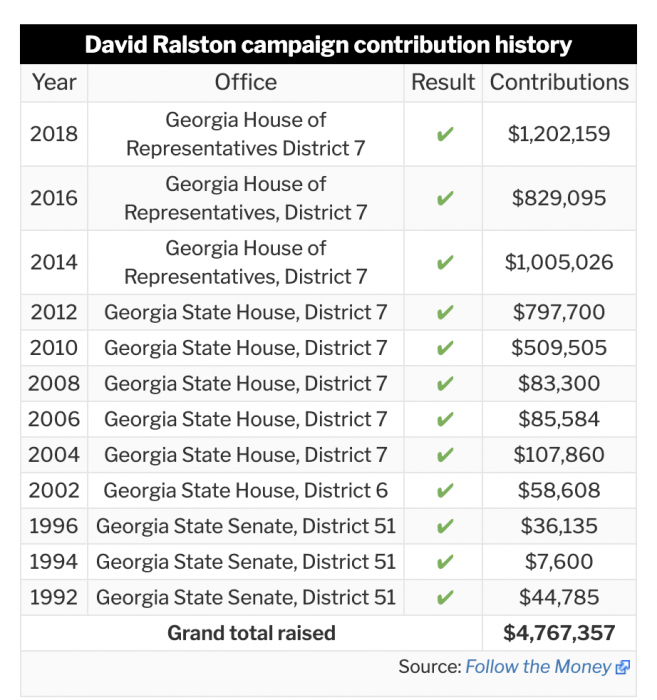 When Stacey Abrams served as the minority leader in the State House of Representatives, David Ralston complimented her in the NY Times “ability to reach across the aisle”.

Most politicians avoid criticizing Ralston, even Stacey Abrams.  She told the AJC in 2019 “I believe that David Ralston will make the decision that is the best calibration of those two responsibilities, but I also recognize that this is a conversation for the General Assembly to have – and for him to have with his family and his law firm. I would leave it to him make that decision.”

According to the AJC, complaints against Ralston were filed in 2019 with the GA Bar, accusing him of stalling court cases and attending non-legislative events, such as campaign fundraisers, golf tournaments, luncheons, speeches, etc. These complaints appear to be dismissed.

Ga Bar Public Disciplinary History of David Ralston lists only 1 reprimand from 2016. It was regarding violating Rules of Professional Conduct for loaning a client money. Ralston is currently is in “Good Standing” with the GA Bar.

Is the GA BAR Proactive for Victims Justice?

Does the GA Bar not care about victims in the complaints? Clearly not, if they don’t discipline Ralston.

Georgia is well known as a major hub of child trafficking. Many children go missing every month and disappear into a sinister world of pain, abuse and trauma.

The GA Bar Journal stated in  2012 – “Although significant strides have been made in Georgia, there is still work to be done to further strengthen law, policy, and programming aimed at combating human trafficking in our state and elsewhere.”

What has been done since then? Nothing according to site searches and Georgias weak laws. Ga Bar has a Judicial Procedure and Administration/Uniform Rules Committee and Advisory Committee on Legislation. They have done very little we can tell, as the problem has grown worse in the past 9 years.

A recent study showing Georgia law on Child Sexual Abuse is the worst in the South. According to a UGA, Georgia has the shortest civil statute of limitations in the southeast for child sexual abuse claims. Georgia also has a heightened gross negligence standard for sexual abuse claims when entities or organizations are defendants.

Lin Wood has No record of public discipline and has been in good standing since 1977.

Mr. Wood has recently gained national media attention over the 2020 presidential election, speaking out about election fraud concerns and Canadian Dominion machines used. Based in Toronto, Dominion isn’t even used there for national races. Elections Canada had a snarky tweet 11/16 that they use paper ballots, counted by hand in front of scrutineers.

Elections Canada does not use Dominion Voting Systems. We use paper ballots counted by hand in front of scrutineers and have never used voting machines or electronic tabulators to count votes in our 100-year history. #CdnPoli pic.twitter.com/dp7ZiB84ql

Lin Wood has also been vocal against child sex trafficking.

Is this why the GA Bar is attacking him? Lin Wood questions the elections that keep reinstalling politicians that do not protect the children and victims of crimes. While the GA Bar does nothing?

Georgia has a Two-Tier System of Justice

Georgia has been found out, a Grand Jury should be impaneled to indict Ralston and the GA Bar for ethics violations!

Time to get rid of this fat slob

Raulston has blocked every attempt to put Constitutional Carry on the floor for a vote. He doesn’t care about Georgians . He only cares what the Democrat establishment thinks. We must vote this evil man out!!

Georgians must make it a priority to either primary this RINO or indict him. The state will not change for the better if he remains in office.