Dominion Logic And Analysis Testing May Not Increase Election Confidence

In the wake of the Georgia Primary Election on May 24th, citizens have attempted to petition their county governments for additional election quality control measures and materials. Quality control requires transparency, communication, a willingness for all parties to thoroughly understand the law, and additional information to see behind the ‘election curtain.’ However, that show curtain is heavy and those who pull the strings are refusing to grip the cord and show what truly lies on the stage for various reasons.

Revealing alarms from the Georgia Primary Election on May 24th have been daily, from state candidates mysteriously ‘removed’ from the races for which they qualified in early March to countless occurrences of ‘Already Voted’ security breaches at the polls. Hardly a soul can be found who voted for Secretary of State Brad Raffensberger, yet it is clear the man is headlong focused on hitting the button on his state certification of his '52.37%' win. Candidates throughout the state have attempted to obtain hand recounts on their races, but everything has been shut down with the familiar responses of ‘it is not a razor thin 0.05% margin,’ ‘insufficient reason,’ or ‘no visible appearance of discrepancy.’ Petitions are being disseminated for state maladministration charges, hand recounts, and discontinuance of Dominion machines, yet every attempt is being made to deny the legitimacy of concerns in counties statewide.

Suspiciously, the state is making every effort to deny all of the critical public property behind the curtain, the availability of which would easily place all concerns to rest. County attorneys and election supervisors are proxies in issuing these refusals to citizens and the request that VoterGA made to every Georgia county on election night. Specifically, citizens want access to the election returns, the paper ballots that the voters personally inspected and fed into the tabulators or submitted as absentee voters. The very reason these ballots exist is for quality control, to confirm voter confidence, and for post-election hand-count inspections. The ability of Georgia citizens in EVERY county to know if the Dominion output matches the sacred intellectual property on these ballots is absolutely critical.

On June 3, The Cybersecurity and Infrastructure Security Agency, a division of the United States Department of Homeland Security, rocked the world with their post-certification release of a bombshell report entitled “Vulnerabilities Affecting Dominion Voting Systems ImageCast X.” Yes, hackers do exist, and the role of CISA is to mitigate any effect they may have regarding American interest. Elections are at the top of American interest.

The following week, counties statewide began releasing public notices of “Logic & Analysis Testing” By state law, these tests must be conducted just prior to an election and many of these tests were performed throughout the state in mid-April previous to the primary election. Details about it can be found here.

Amusing to some, this testing seems to woefully miss the mark of what election integrity proponents perceive as repeated real-time manipulation of the voting system. For example, the shape of the vote proportion curves of each of the GOP gubernatorial candidates appears to be eerily similar to some of the statistical patterns noted in the 2020 election. This is something that happened real-time, on election day. They trend lines nearly identically mirror each other, as this article describes with statistical work by Lady Draza.

Cybersecurity experts worldwide broadly acknowledge vulnerabilities in banking, government, and health. However, there seems to be an endemic denial among those in the government sector and those with corporate interest that this could occur in our elections sector.

At such a time of massive election integrity doubt in Georgia and pre-election polling that does not nearly resemble the election ‘results’ output of the contracted Dominion voting systems, it seems these vulnerabilities should be taken seriously by those with the duty to conduct inspections. One of the most simple mitigation strategies listed in the CISA report is the following: “Conduct rigorous post-election tabulation audits of the human-readable portions of physical ballots and paper records, to include reviewing ballot chain of custody and conducting voter/ballot reconciliation procedures. These activities are especially crucial to detect attacks where the listed vulnerabilities are exploited such that a barcode is manipulated to be tabulated inconsistently with the human-readable portion of the paper ballot. (NOTE: If states and jurisdictions so choose, the ImageCast X provides the configuration option to produce ballots that do not print barcodes for tabulation.)

However, the Secretary of State and his legal proponents are encouraging counties to deny the broad open records requests by issuing what many find to be false legal reasoning. Access to legal public records, to include ballots, would enable citizens to compare the paper ballots and the ballot image information stored on the Dominion server to ensure quality control of the sacred intellectual property of the electors. And, the ballots contain no personally identifiable information. Additionally, according to the detailed legal work of the VoterGA organization, their reasoning does not pass legal and basic logical reasoning tests. A press conference Thursday describes the VoterGA position more thoroughly as they urge counties to promptly remit these critical open records if their returns are yet unsealed.

Perhaps, those who have or may possibly tamper with Georgia elections are laughing at the thought that testing a system in steady state would reveal any potential LIVE system tampering. It is unlikely to enhance public confidence at this time among those citizens who make this area of public accountability their missional work. 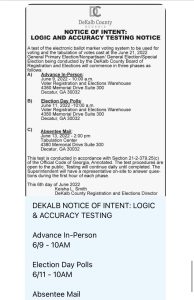 ‘NO AD’ subscription for CDM!  Sign up here and support real investigative journalism and help save the republic!